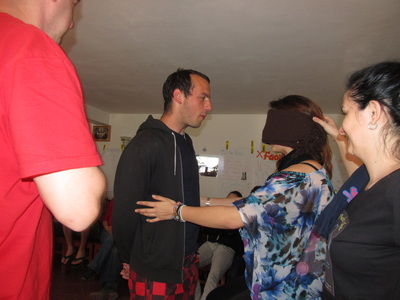 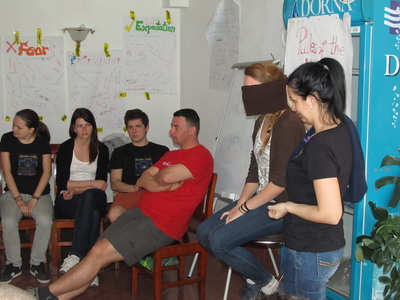 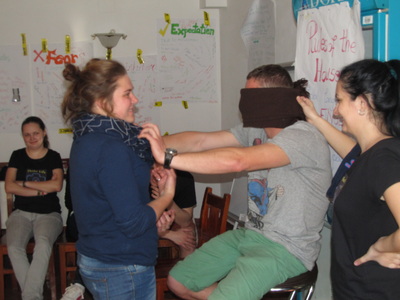 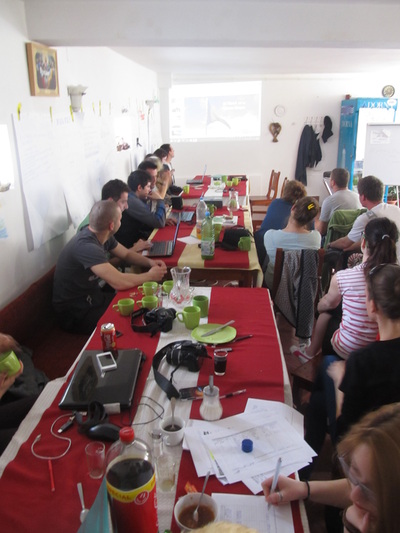 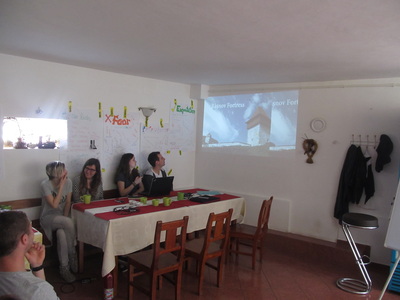 DAY SIX
31st March was not only the last, but also maybe the saddest and at the same time the greatest day of the project. The morning started with a great breakfast as usual, but everyone seemed to be now more and close to the others, they would talk more and laugh out full of joy, be friendly with everyone and just look  as a whoooole big group of friends, indeed a family.

After we ate, there were prepared some presentations of the Youth in Action program and also the introduction of the new one – Erasmus +, held by our president. Of course, as we did not want to have only theoretical parts in our presentation, we decided to make a short funny game, adapted to the previously discussed subjects, so that we should also check how much information stayed with our participants. We called it ‘ Would you be millionaire?’, so everyone got excited at this day-dreaming idea and got involved, doing their best.

Having a short break for coffee or tea, we went on with the planned activities. The next one on our schedule was the Secret Friend. Using a scarf we had each of us sitting on a chair in the middle of the circle that the other formed in the seminar room. At first, if someone close to the eye-tied person wanted to play a trick on them, they would just come in front of the person, answering to his questions and allowing him to be touched, so that the one in the center could try to guess who is standing in front of him.  It was fun to reveal everyone’s secret friend, there were persons who supposed or had a tinny idea about who their secret friend was, but there where also participants who wouldn’t guess in a century who was surprising them all that time with candies or followers or sweet messages.

After sharing all this joy, all of us were asked to sit in a perfect large circle and a low volume and a bit melancholic song started to play somewhere in the room. In the middle of our circle there was a big glass full of matches and our facilitator was holding 2 match boxes. Almost none of us knew what was all about. Then she told us. By the time one match burnt, each of us had to share with the other all the feelings and emotions he had, experiences he learnt, things he came to know, friend he made, impressions he formed and also wishes for the future. Each of us was trying to save as much time as possible and make the match burn slower, so that he could share more. There were smiles and there were tears of having to leave their new friends go each to their own homes. The room suddenly was so full of mixed emotions and with all the space between us, we were all feeling as we were all one. One feeling for one moment in time that was and will always be unique – true friendship.

Of course that later everyone had the opportunity to say what the enjoyed the most or what they would improve for the project. The evening culminated with the Photo contest where Czech Republic were ranked the first ones, Romania obtained the second place and the other winner of a beautiful landscape capture was represented by the Croatian team. The final leaders meeting was a real impressive one as we were so glad to find out that the project turned up to be a success for all the participants, they were all very pleased and ready to come back to Romania on any occasion!

So these being said, we are waiting for you all again in Moieciu ,Romania to bring again together all the happy moments and create in turn new ones! 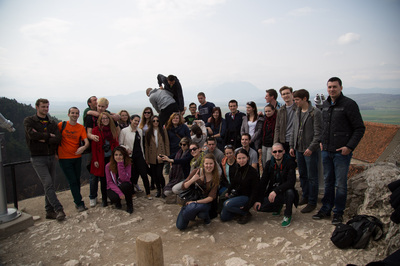 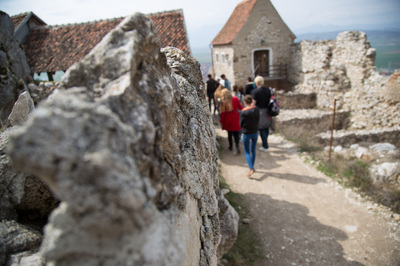 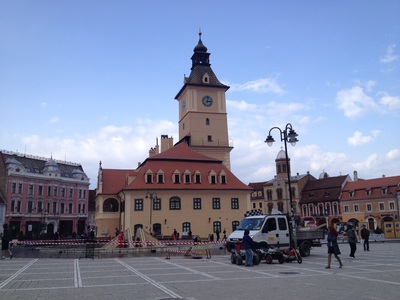 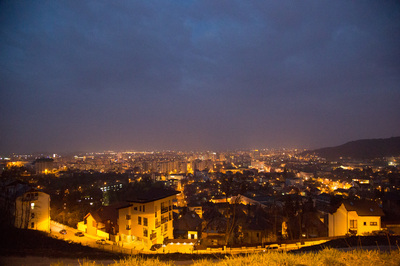 DAY FIVE: As Romanians seen it.
The day started at 9 AM with a nice breakfast. After that we packed our thinks and at 10 am we left to Râșnov Fortress.
The weather was on our side (sunny and warm), despite the forecast that got us scared with heavi rains and cold. So the visit of the fortress was realaxing and the photos were great. Plus our guide was good looking :) [Romanian girls wrote this], his English was perfect and he answered all the questions.
Around 2 o'clock we left from Râșnov to Brașov, to visit the old city center: Black Church, Piata Sfatului and the Enescu Square. Then the leaders gave us 2 and a half hours to visit the city. Some went alone visiting the city, other went for a snack and so on. At 6 o'clock we meet in a certain place in Brasov and went to the Brasov Fortress.
All in all this was a good day, unfortunately it was a tired day too and we do not have any inspiration to talk about this day, the photos will tell the story that we can't tell now.
DAY FOUR: Czech point of view
We had woken up for our breakfast, which started at 9.00 am. The food was delicious as always here in the Pension and I can confirm for all the Czechs, that we really enjoyed it. Thumbs up for our Romanian hosts, you made our mornings friendlier! Thanks!
After breakfast we all took a few minutes break to refresh ourselves and prepared for new sunny day and new tasks. In the morning we formed back to our groups in which we had been divided from Friday. On Friday we visited Rasnov fortress and Brasov city, where we were supposed to be shooting photos and videos. Our Saturday morning task was to create a short presentation made of our best photos containing shoot from the day before. Finally we presented our work to other groups. Then came the lunch and after that we got some free time. People used this time for playing games, walking to the neighbourhood or just chilling in the pension’s backyard.
The main task of the day came later on afternoon. We were divided into another groups and organisers explained us what will be going on. Our goal was to create short movie on the theme: “How we met Dracula”. After 3-4 hours of screenplay writing, shooting scenes in Moieciu de Jos surroundings and cutting the material, all of us was really surprised what we can do in spite of having less time. After dinner we all met in meeting hall to watch our master pieces. The movies took about 5-8 minutes and we had to say, that all were so original, smart and of course funny. We all did our best! No doubts!
The end of the day belonged to our hosts. They were presenting their country, Romania. They were wearing their traditional costumes and had prepared for us traditional Romanian food. The Romanian evening easily slid to the party. We were eating delicious food, drinking traditional drinks and dancing. 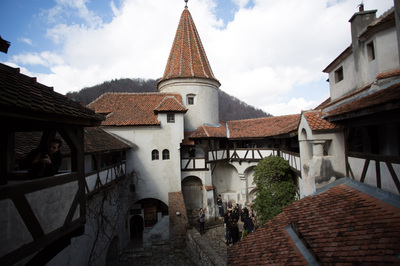 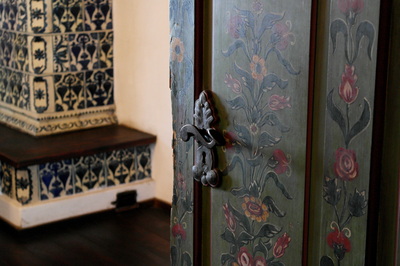 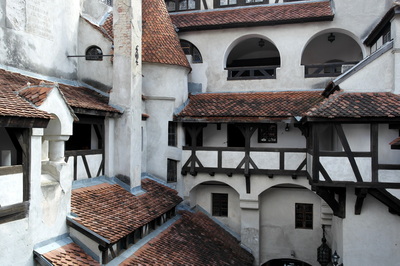 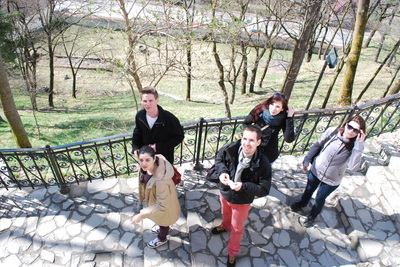 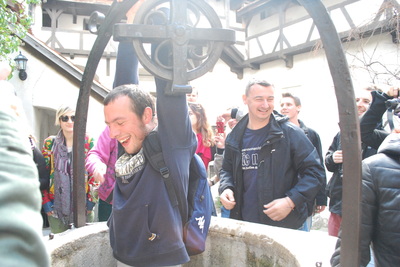 DAY THREE: The Croatian side of story
We had to wake up at 8:30 (30 minutes earlier) because in 9 am we had an organized trip to Bran castle. When we arrived to the famous castle we jumped in to it, armed with our cameras and we raped Dracula with photography. Even the guide, who was really great, said that we look like Chineze tourists with all our equipment. The castle was nice, full of interesting old furniture, it had 4 floors and between second and third floor were secret stairs, which had a sign next to them.
At the end we throw some money in the well for whishes. The Chineze heard about us, and they run to the castle, and we meet in front with all our equipment. Bran, the city, is a touristic place with many shops, and the interesting thing is that they have 3000 hotels, and all because of the Dracula, and also amazing nature. The prices in Bran are quite expensive, for example in bar one beer is 7 Lei. In the city we went to have a snack, and the waitress was really polite and she ask us if we want to exchange some of our money (from our contries) and in a tramp we got Silva beer glasses. After the Bran, we came back to the hotel, eaten a delicious lunch and at 4 pm we begin with afternoon session.
They gave us a great task. We had to split in groups. Each group had to create a name for themself, take a group picture in front of the church which we had to find out the name of the church, learn 10 new Romanian words, have a video interview with locals, visit the cross on the hill, and to trade an egg with locals with anything else they can provide... It was an interesting experience. We don't know to speak Romanian and the first guy we meet talked perfectly English, and he was a local architect. He told us that he heard a story that the cross on the hill was made by a gay guy and the cross was his gift to his boyfriend who died in a car accident. Because we had to ask locals for direction for the hill, we met some who were very polite, but also we asked sheep who gave us the right answer. In our group there was Karl, Estonian guy, who had never been on such a high point, because in Estonia the highest peak is 300 m. He almost had a heart attack. When we came back to the hotel, we had again a delicious dinner, a barbeque!
In the evening we had the intercultural night - the Czech Republic and Estonia. We learned some interesting facts about their countries, tasted some of their traditional sweets and drinks, and after that had some fun. 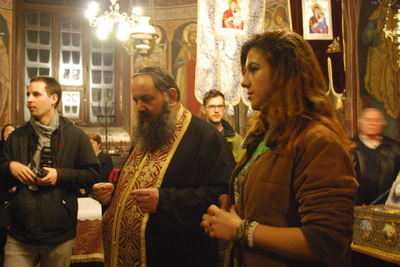 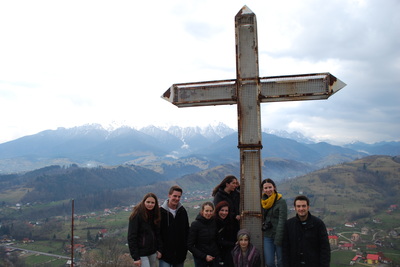 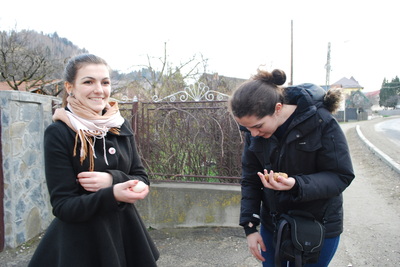 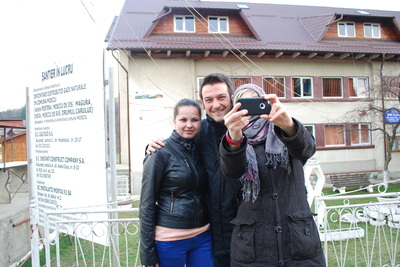 DAY TWO: The Lithuanian view
Our day started early in the morning, around 8:00. It was our first day at the project, so after eating breakfast, organisators held several games for us to get to know each other, then some interactive games to energise our tired bodies. When we finished playing all those introductions and games we had lunch.
After the lunch we tried to be young adventurers by taking a walk around the neighbourhood (with participants from other countries) and headed for the mountains, though we failed as there was no route that could lead us there, and we were short on time because of other activities that were waiting for us. When we came back, a introductional movie about photography was waiting for us, how important a good lightning is and what setings to use so we could learn how to take profesional photos. During the movie we had a short break to get our energy back.
Afterwards the movie, we had dinner and headed to a local church, where we had a conversation with the high priest of the church, took photos and got quite a few good advices on how to live our lives.
FIRST DAY: Meeting up in Moieciu de Jos, Brașov - Romania
For the first day, we have started early by gathering the Romanian team in our host location in Moieciu. This was to share from the daily tasks, and start welcoming our guests. While Cosmin  was going to bring part of the Estonian and Lithuanian groups, Madalina and the others were finishing up the activities at Brasov.

You can request further details about the project by contacting us at proiecte@adtre.eu
This project has been funded with support from the European Commission. This publication reflects the views only of the author, and the Commission cannot be held responsible for any use which may be made of the information contained therein.
Powered by